An Overview of the NetFlow Protocol

NetFlow is a protocol used to collect metadata on IP traffic flows traversing a network device. 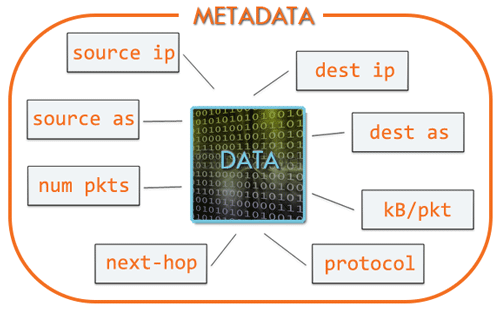 Developed by Cisco Systems, NetFlow is a protocol that is used to record metadata about IP traffic flows traversing a network device such as a router, switch, or host. A NetFlow-enabled device generates metadata at the interface level and sends this information to a flow collector, where the flow records are stored to enable network traffic analytics. A network operator can use NetFlow data to determine network throughput, packet loss, and traffic congestion at a specific interface level. NetFlow data also supports other network-level monitoring use cases such as DDoS detection and BGP peering.

While the term “NetFlow” is commonly used to refer to all types of flow records and datagrams, there are actually three important variants in regular use within live production networks:

A NetFlow exporter (NetFlow-enabled device) identifies a flow as a unidirectional stream of packets having in common (at least) the following:

These same attributes that define a given set of packet as a flow make up the core metadata (information about the flow rather than the information that’s actually in the packets) that is included in the NetFlow “flow record” for that flow. Each time a new unidirectional IP traffic flow starts traversing a device a new NetFlow flow record is created and tracked in the device’s on-board cache.

A flow record is ready for export when one of the following is true about the corresponding flow:

At export, the flow record is encapsulated in a UDP datagram and sent to a NetFlow collector that is typically external to NetFlow-enabled device. The collector collects and stores the flow metadata in a record format that is defined by the protocol. The data points found in a NetFlow record typically include:

The fields that make up a NetFlow flow record depend on the version of NetFlow supported by the NetFlow exporter. Since the protocol was first introduced by Cisco in 1996 it has been updated numerous times in a series of backward-compatible versions, the most commonly used of which are versions 5 and 9: