The Why and How of Interface Classification

Given that Kentik was founded primarily by network engineers, it’s easy to think of our raison d’etre in terms of addressing the day-to-day challenges of network operations. While that’s a key aspect of our mission, our unique big data platform for capturing, unifying, and analyzing network data actually supports a broader scope. Kentik Detect is built to generate valuable insights not only from the technical perspective but also for business intelligence. A great example of this duality is a feature called

Interface Classification (IC) that we recently introduced to our portal. IC spares technical teams by streamlining an otherwise-tedious task, but it also exposes information that provides sales teams with real competitive advantage. In this post we’ll look at several aspects of this new capability, including the technical and business problems it solves, the database dimensions we’ve added to enable it, and how to get started using it. In a future post we’ll take a closer look at some typical use cases.

From a technical standpoint, Interface Classification provides an elegant solution to a critical question of flow-based analytics: how do we uniquely identify flows when they may pass through multiple interfaces within our autonomous system (AS)? We know that flows are a set of packets that share common attributes including protocol, source and destination IP, and src, dst, and next-hop AS. The problem arises because flow records (NetFlow, sFlow, IPFIX, etc.) are generated by individual routers, switches, and hosts rather than system wide. So unless the records generated at various points can be correlated, a given flow may be counted as multiple flows, throwing off the count. 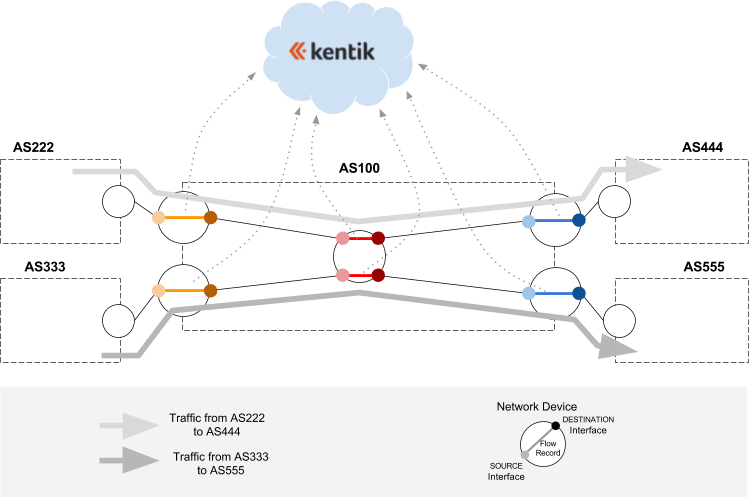 The multiple-count issue has (naturally) been anticipated in Kentik Detect from the outset. The flow metadata stored in the Kentik Data Engine (our backend) isn’t simply what comes to us from network devices; instead it is enhanced with a variety of derived or externally acquired information (e.g. BGP, GeoIP, SNMP, etc.) that makes it possible to minimize double-counting. For example you can manually select the devices included in a query, or use filters based on device names (e.g. names containing “EDGE”) or manually-entered interface descriptions. You can even use Saved Filters to avoid having to recreate the necessary filters for each query.

The downside of these approaches is that they place a hurdle that users have to jump when they are trying to get information. And unfortunately they aren’t completely foolproof because the user has no way of knowing if the fields being filtered are consistent (does everybody in the organization use the exact same label strings?) or accurate (have descriptions been updated when interfaces are repurposed?).

Interface Classification addresses the above issues by introducing the concept of Network Boundary, which allows any interface in a Kentik Detect user’s network to be characterized in one of two ways:

Assuming that the interfaces themselves have been correctly classified (we’ll get to this later), if we now filter on a given combination of source and destination network boundary values, as shown in the table below, we can easily zero in only on traffic with the directionality that we want to query, and avoid seeing the same flow counted multiple times.

What Does My Traffic Cost?

Now that we have a sense of Interface Classification from the engineering perspective, let’s dig into the business side. Needless to say, you can’t make a profit moving traffic unless you sell your services for more than your cost. So to optimize pricing you need to know the end-to-end ROI of traffic coming from a given network, transiting through your own network, and exiting at multiple locations in different volumes. You also need to be able to slice traffic by categories of connectivity: transit, Internet Exchange peering, direct peering (free or paid), long distance backbone, metropolitan backbone, etc. That information isn’t included in any flow protocol, which has made rational pricing surprisingly difficult to determine. As with the flow-counting issue, Kentik Detect’s powerful filtering capabilities can get you a long way toward the info you need. That’s because networking best practices — if consistently adhered to — give you a couple of ways to try to figure out what’s what:

The two methods above enable us to take the same approach to connectivity typing that we took with network boundary. In other words we created attributes for the Connectivity Type of interfaces, and we can assign connectivity type values for both source and destination interfaces to flows as they are ingested into KDE. That makes it much easier to include connectivity type as a factor in a query, so you can look at the type of network from which a given set of traffic is entering and to which it is going. Here’s the list of connectivity types that we are supporting in our initial release:

So far we’ve looked at the challenges that Interface Classification addresses and the attributes whose values can now be incorporated directly into KDE flow records. But these attributes only help us if attribute values have been accurately and consistently assigned to the interfaces themselves. That’s a big hurdle, because some networks have multiple thousands or tens of thousands of interfaces to classify. And it’s not a one-time job, because interfaces are added or decommissioned every day, rendering manual classification nearly impossible to keep consistent. So we need a practical way to automate the initial classification and then keep it up to date. That brings us to the real fun, which is our new Interface Classification rules engine. 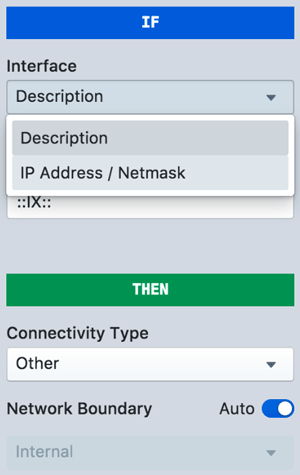 The rules engine, accessed in the portal via Admin » Interface Classification, looks periodically at the SNMP attributes gathered from the interfaces that you’ve registered with Kentik Detect, and it evaluates those attributes using a limited set of user-configurable “if-match-then-classify” rules. These rules are defined in the editing pane of the Add Rule dialog (image at right), which you reach via the green Add Rule button.

The “If” section tells the rules engine what condition to match, while the “Then” section enables you to define the corresponding Connectivity Type. By default, the Network Boundary is automatically determined by the Connectivity Type. You can change the automatic correspondence between the two attributes (click the Configure Network Boundaries link on the main IC page), or you can toggle Auto to off, then manually set the boundary that will be applied for an individual rule.

These settings allow us to build rules in a couple of different ways:

The following table gives an idea of the types of matching you can currently use in your rules:

The Interface Classification UI gives you the ability to test rules before they are actually applied so that you know how many (and which) interfaces would be classified by the rule. Once you are happy with a rule you save it to the rules list (shown in the screenshot below). In most cases you’ll define multiple rules, which can be reordered in the list as desired (as well as disabled or deleted).

When you click the Evaluate Rules button (upper right) the engine works through the interfaces on all of your registered devices. Classification is applied based on the first (top-most) match condition (“if”) that results in a match. When an interface is classified, the values of the two attributes (connectivity type and network boundary) are written to your organization’s devices database in Kentik Detect, which is updated every three hours. From there the values are applied to incoming flow records as they are processed by our ingest layer. 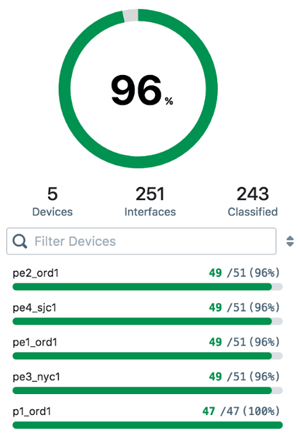