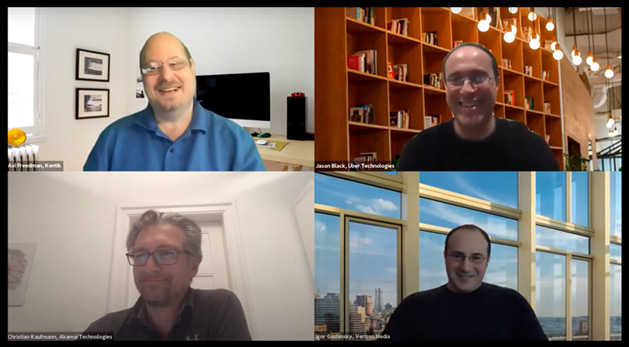 Last week Kentik hosted its second virtual panel on scaling networks and services during COVID-19. As our moderator, Kentik Co-founder and CEO Avi Freedman was joined by network leaders from Akamai, Uber and Verizon Media, namely:

Traffic Growth and the Capacity to Scale

The Kentik team continues to monitor network traffic trends in correlation with COVID-19’s shelter-in-place orders and increased remote work and distance learning across the globe. This was one of the first topics that Avi asked panelists about, too. Has network traffic continued to increase or stabilize?

Igor from Verizon Media said they’ve observed web traffic growth of about 30 percent. He also noted “gaming traffic is way up,” as are entertainment services in general. Igor said where there has traditionally been a nighttime peak of traffic, with people then-coming home from work and turning to streaming services and other forms of online entertainment, that peak has now also shifted into the daytime hours. “They’re home all the time, so it looks like they’re doing both,” he added.

Christian from Akamai said they’ve also seen network traffic increase about 30 percent over the past month. However, he added that in looking from March 2019 to March 2020, Akamai saw network traffic had doubled year-over-year.

In terms of having the capacity to handle higher levels of traffic, all of the panelists agreed with Uber’s Jason Black, “We’ve built our backbone to scale, and we are well-provisioned to be able to handle whatever traffic we need.”

While many digital enterprises and service providers have recently shared with us that they’ve had the extra capacity and were designed for scale, even before COVID-19, we wanted to know how that fits into our panelists’ business continuity and disaster recovery (BC/DR) plans.

Christian from Akamai talked about the importance of network automation for BC/DR. Specifically, he advised on having a good understanding of cluster or server status where, if one cluster or server fails, there is automation in place for another one to take over without network latency or performance issues.

Igor shared that Verizon Media had a plan BC/DR in place, which included being able to support all of their employees in a remote setting for three weeks. (They’ve built upon this plan most recently). Igor also mentioned that the Verizon Media team was prepared for some supply chain delays this year, given the Chinese New Year in February, so they had a deeper buffer built-in for an anticipated slowdown.

Jason said he’s had weekly calls “down to the chip-level” to understand what Uber’s supply chain looks like. “I am seeing that there are delays of a month to two months, even in some manufacturing processes, which is obviously going to spill over into the OEM switch market and then further and further up the chain,” he said. Jason’s advice? “Don’t put all of your eggs in one basket.” Uber’s network team is vendor-agnostic and aims to avoid any lock-in situations so that they can diversify across vendors and have flexibility in their infrastructure to make changes quickly and where needed.

The panelists went on to discuss their network architectures, hiring plans for the road ahead, and new levels of productivity observed (while still maintaining their network teams’ work-life balance). If you missed the event, you can watch the replay of Kentik’s virtual panel here.

We’re already busy planning for our next few virtual panels, so keep an eye out for future invites. Until then, take a minute to learn how Kentik can help you run your network and support your remote workforce now. Get 120 days of the Kentik service, with no subscription fees.

UPDATED 3/26/20: Trends in Network Traffic in Correlation with COVID-19