As a Director of Product Management here at Kentik, I specialize in service provider networks and content delivery over the internet. I am also a die-hard gamer!

In my day job, I’ve helped large providers build global content delivery infrastructure and OTT (Over The Top) content delivery. I’ve also worked closely with ISPs to help them gain insight about how their subscribers download content, disambiguating the myriad of combined connectivity and traffic handover methods so that they can manage cost and performance to the best of their ability.

I’ve written several Kentik blog posts and articles about this in the past, including Kentik True Origins Brings CDN Insights to ISPs and The CDN Era Requires New Network Visibility Standards.

As a product owner, I am focused on anything related to CDN and OTT traffic classification. I regularly dive into internet-based content events. I make sure our OTT/CDN detection engine picks these up and that the engine does the best job possible at helping ISPs disambiguate the “infrastructure visibility gap.”

As an avid gamer, I’ve been gaming in any shape or form since the early nineties, when everything was entirely offline. I have accumulated many acquaintances and much knowledge of this industry over the years, trying to stay up to date with what’s new, what’s to come, and how games are delivered to end-users.

I was excited when I got this email update from the Steam games distribution platform in my inbox: 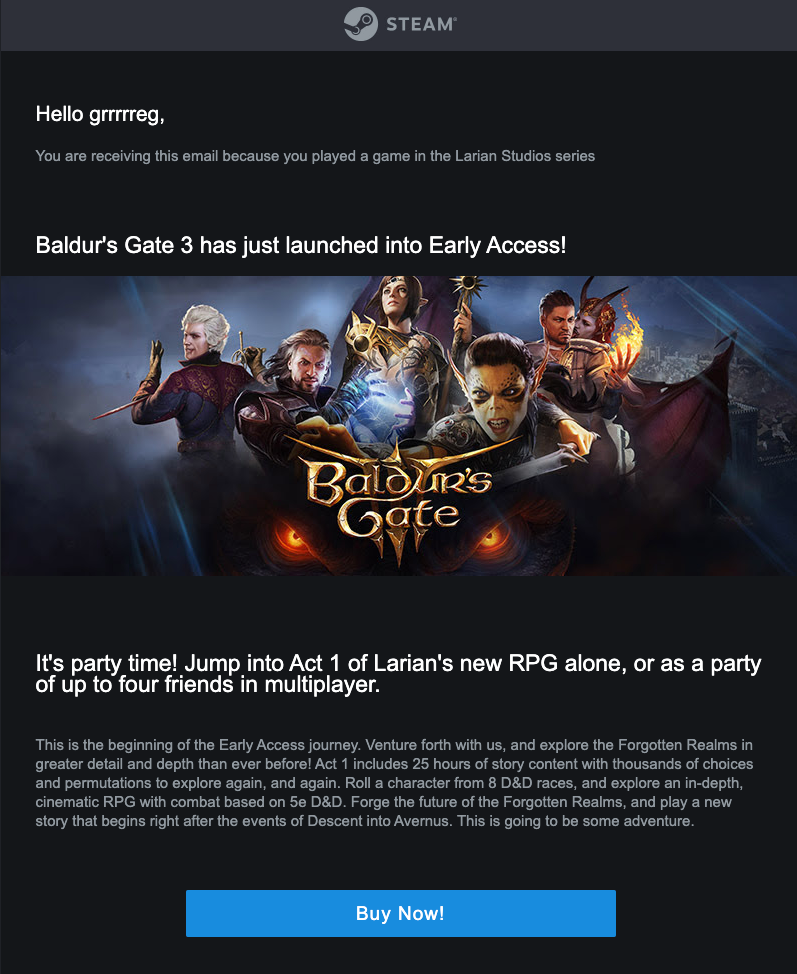 For those not familiar with it, the Baldur’s Gate series is the most iconic role-playing game franchise that was ever released, based on the Forgotten Realms universe and ruleset from the legendary tabletop role-playing game Advanced Dungeons & Dragons. I remember clocking hundreds of hours on Baldur’s Gate 1, in 1998, then again in 2000 when the sequel was released.

Fast-forward 20 years, and a studio other than the initial BioWare studio, Larian Studio, had acquired the license and set itself to develop the third installment of this excellent series. I learned that while only 30% of the way completed, the game was opened for early release — something that was unthinkable, back in the day (remember you couldn’t release a game and then update it, since everything was pretty much offline). Call me a die-hard fanboy, but I didn’t think twice about buying a game that was in its early stages of development.

Now here’s where things get even more interesting from a content delivery perspective, looking at the game’s system requirements on Steam and OMG!

I’ve never installed a game that was so huge — 150GB of disk space required! Back in the day, it would have been unthinkable. To add some perspective, DVDs, which were the primary distribution could store 4.7GB (single-layer DVD) or up to 8GB (dual-layer DVD). Think about this: Baldur’s Gate 3, back then, would have required a box containing at least 18 dual-layer install DVDs!

Today, ISPs have to carry that same payload to every one of their gaming subscribers who wants to give the game a spin. Seeing this further convinced me that OTT visibility is key to any ISP’s need to keep performance high and delivery costs low.

Through the eyes of a Kentik user

In 1998, when I was about to enter university as an MSc student, I remember my gaming nerd friends and I were very excited about this game. Now, more than 20 years later, I’m almost 100% certain that any of them, still in the IT industry, will buy and play that game to reminisce fondly the hours spent staring at our screens exploring the medieval earth of the Sword Coast.

The point that I’m trying to make here is that:

Given that, I set out to check whether our OTT and CDN engine did its job and whether this early release is a good precursor for the future traffic event that will result when the game releases in 2021. Only Steam offers this early release, so I didn’t have to look for an event across multiple platforms and content providers, thus simplifying the analysis. Other recently released games, including Call of Duty (Blizzard, Steam, Xbox Live, Playstation Network) and Fortnite, are distributed across multiple platforms, complicating the picture.

On the surface, this week has been a standard week for gaming; nothing out of the ordinary shows in the Kentik OTT summary screen. Video and gaming represent nearly 70% of an ISP’s traffic, which implies that these two content areas are the benchmark for an ISP’s subscriber’s performance and the main cost center for network capacity.

No smoking Baldur’s Gate 3 gun here; I needed to dive a little bit deeper because the traffic event could have been confused with other gaming traffic. Remember, this is just an early release, and many players have no interest in playing an unfinished game.

So I wanted to dig in and isolate gaming traffic. While the usual suspects still occupy the top of the gaming traffic ladder, something seems to be worth our attention.

Notice the bump on that Steam content provider traffic sparkline. The event, even though displayed with other types of traffic, was hiding in plain sight!

The Steam bump was even more apparent when switching from a 1-week view to a 30-day view:

I should also mention that Call of Duty: Modern Warfare got an update on September 29, which you can see as a simultaneous bump on XBOX Live, Playstation and Blizzard. Googling it confirms this hunch (I’m getting good at it) - September 29 marks the release of CoD’s Season 6.

Going back to Baldur’s Gate 3, I wanted to measure the impact this release has had on my edge network. 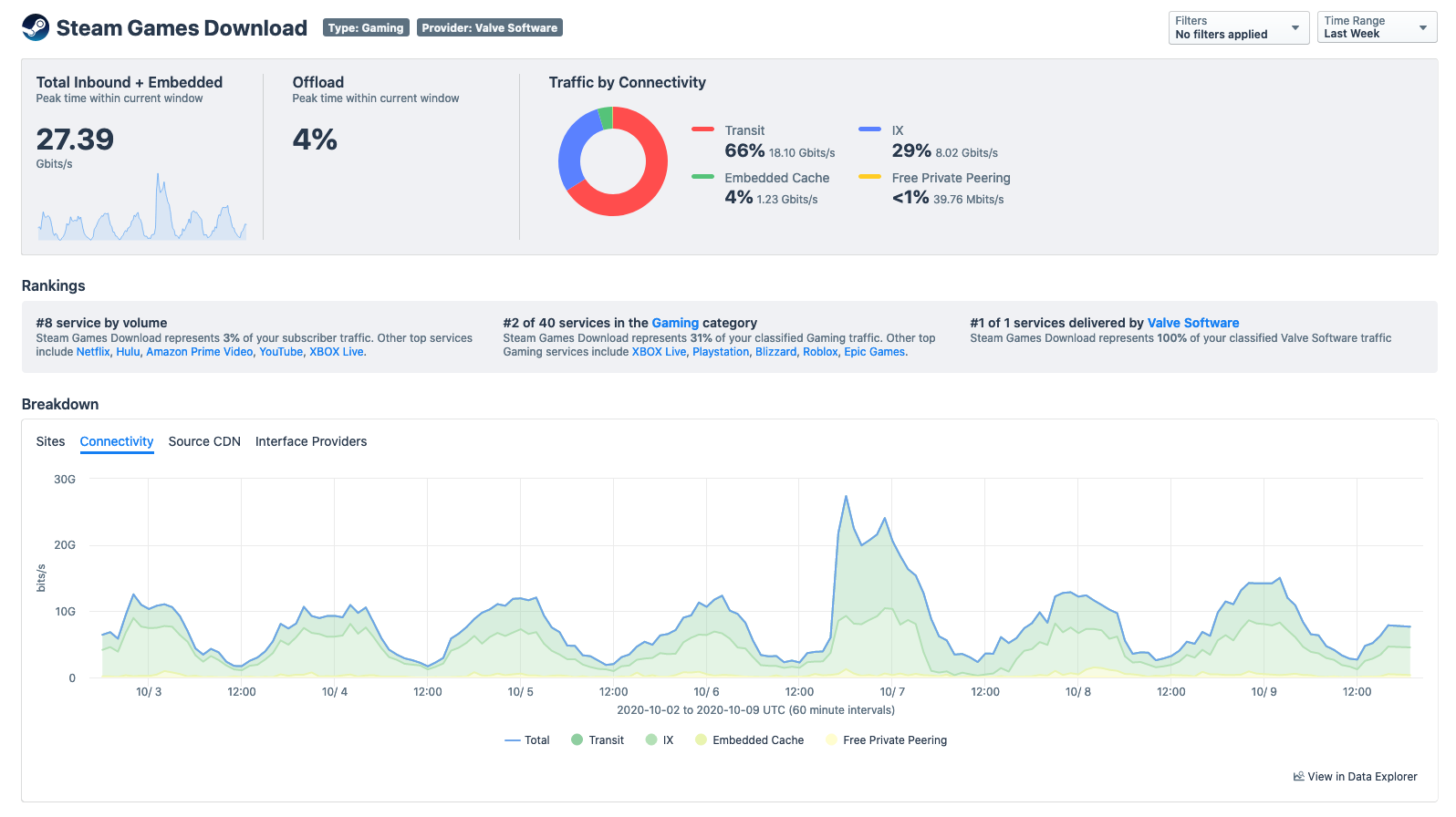 What I notice first is that Steam traffic almost tripled compared to the regular peaks. It went from slightly above 10Gbps to nearly 30Gbps. Though we’re not talking about huge volumes, depending on handover capacity, this could cause an issue in interconnection ports.

I will also note that 60% of this Steam traffic comes via transit, which is likely the most costly method, and the least performant in terms of the number of hops — as well the fact that 30% comes from peering at an internet exchange.

When I looked closely, I saw that both transit and IX connectivity carry traffic directly from Valve’s (the company behind the Steam games distribution platform) own ASN: AS32590.

Note: The screengrab below was modified to remove provider names for CDNs, transit and ASNs.

What can this ISP do moving forward to prepare for the 2021 release of this monumentally epic game?

One way to optimize delivery would be to:

If you are interested in hearing more about my gaming content traffic forensics adventures, please message me; I can nerd out for hours about this!

If you are having trouble bridging the infrastructure visibility gap of CDNs and OTT services, take Kentik for a spin. I’ve got your back!