Partnering with A10 Networks for DDoS Defense

Late 2016 was a busy time for DDoS on multiple fronts. As an industry we experienced unprecedented DDoS attacks on OVH, Krebs, and Dyn that were driven by IoT botnets. As a company, Kentik announced ground-breaking DDoS detection capabilities in Kentik Detect. Drawing on our big data scale and our learning algorithms for baselining, we’ve now proven in the field that we can catch significantly more attacks than traditional approaches. Furthermore, we’ve enabled Kentik Detect to trigger hybrid mitigation, including support for “free” methods like RTBH as well as for integrations with industry-leading mitigation solutions.

All of which brings me to the topic of today’s blog post. While we’ve previously made public reference to the fact that Kentik has been working with A10 Networks, and today we are proud to formally announce both the partnership and our field-ready integration between Kentik Detect and the A10 Thunder TPS mitigation solution.

A10 solutions help protect some of the world's largest networks.

A10 Networks is a networking industry leader, and their series of application networking, load balancing, and DDoS protection solutions accelerate and secure the applications and networks of the world’s largest enterprises, service providers, and cloud platforms. A10’s marquee customers include Yahoo, Box, GoDaddy, Ericsson, and Subaru.

The fact that we had number of customers in common meant that we started seeing A10 Networks regularly in client accounts. Eventually, a mutual customer asked for deeper integration. The result was a project to connect Kentik’s industry-leading DDoS detection and automated notification/triggering with A10’s advanced DDoS mitigation capabilities. Working with A10, we’re now able to support some exciting functionality, like triggering Thunder TPS’ dynamic mitigation, which escalates suspect traffic through progressively tougher countermeasures to minimize impact on legitimate traffic. 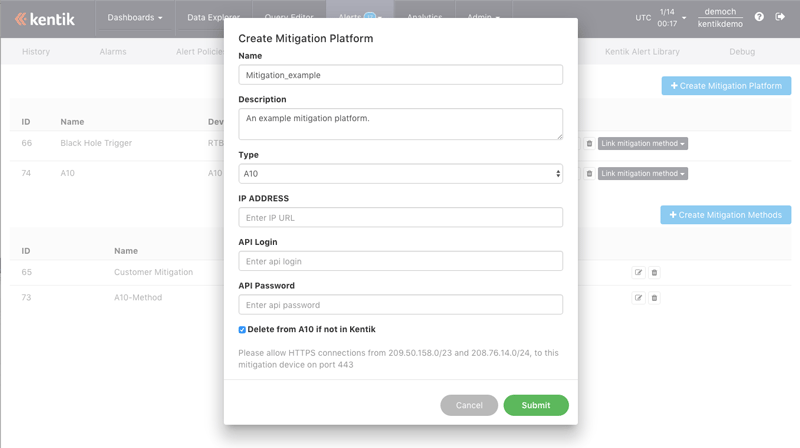 The Need Has Never Been Greater

Kentik’s integration with A10 Networks couldn’t come at a better time, because the need for DDoS protection is rising along with the threat posed by IoT botnets. The recent attacks on OVH, Krebs, and Dyn were (yet another) wake-up call to the industry, reminding us that DDoS-induced outages can have a major negative impact on any targeted business. An IDGConnect survey in 2016 found that the average downtime due to DDoS attacks is 17 hours. Another article in Network World states that “the loss numbers are big, too. Half of the organizations would lose at least $100,000 per hour in a peak-time DDoS-related out-age, [and] 33% would lose more than $250,000 per hour.”

There is a very real need for the industry at large to take a greater degree of ownership over the cyber-security hygiene of IoT devices and internet infrastructure. But the genie is already out of the bottle, so it’s also up to individual digital businesses to take responsibility for their own defense. The partnership between Kentik and A10 Networks will provide a far more accurate and powerful defensive solution than legacy tools and technologies developed for the Internet of a prior generation. Gunter Reiss, Vice President of Strategic Alliances at A10 Networks, puts it this way:

“Recent studies have reported that DDoS attacks are costing companies more and more money. Companies must prepare their networks to stand up to DDoS attacks. We are delighted about our partnership with Kentik, as the Kentik Detect solution augments A10 Networks Thunder TPS appliances and ecosystem, providing massive scale and speed for multi-vector DDoS protection. Together we provide additional detection capabilities for our customers, alleviating the burden on the network and security IT staff.”

At Kentik, teaming with A10 is right in line with our ongoing focus on the front half of the end-to-end DDoS protection equation: accurate attack detection paired with fast, flexible notification and triggering. DDoS detection has always been a key use case for customers who deploy Kentik Detect. For example, Christian Balorre from DailyMotion mentions DDoS as a driving factor in the company’s move to Kentik:

“When you’re handling several hundred gigabits of network traffic each second, effective DDoS detection and traffic engineering insights are critical. At Dailymotion we’ve been looking to replace our open source tools with a solution that can handle our volume and is fast, flexible, scalable, and easy to use. After testing several market-leading systems we chose Kentik Detect, which provides us with the metrics and insights we need to understand everything about our traffic.”

We’re pumped up about sharing the powerful new “one-two” punch of Kentik+A10, which will help organizations of all sizes achieve the higher degree of DDoS protection that 2017 is going to demand. If you’d like to find out more about how Kentik Detect integrates with A10 Networks Thunder TPS solutions, check out the joint solution brief, or to schedule a demo. Or you can experience Kentik Detect for yourself by signing up online for a free trial.