During the last few weeks, and since our September update, our product development organization has continued to roll out new features in the high-demand areas of synthetic testing and hybrid networking. We’d like to give special thanks to our many customers who have participated in Kentik surveys, the advisory board, interviews and provided detailed feedback on product enhancements and new feature ideas.

Here are some recent highlights from the last few weeks:

Kentik has introduced new testing frequency options that range from every 15 seconds down to every second. Furthermore, we have structured pricing for sub-minute synthetic tests to be very attractive. Kentik asks, “Your traffic is continuous, so why isn’t your synthetic testing?”

For the first time in the industry, Kentik makes synthetic testing practical for mission-critical applications such as machine, factory and warehouse automation, where high-frequency testing is required, missing nothing. 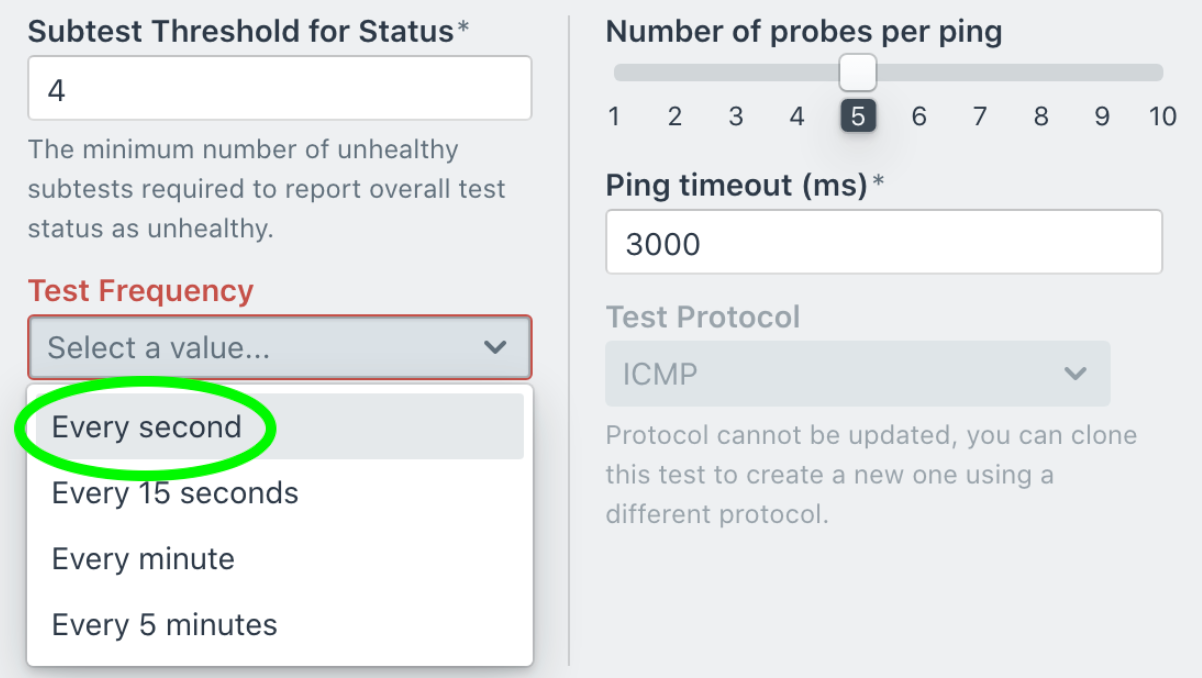 Only Kentik makes continuous synthetic testing affordable. Continuous testing is critical for latency-sensitive use cases such as machine automation.

We’ve added new options under the Advanced menu when creating new tests. Users can increase the number of probes sent per test (to gather more data points) or dial it down (to prevent flooding the network). 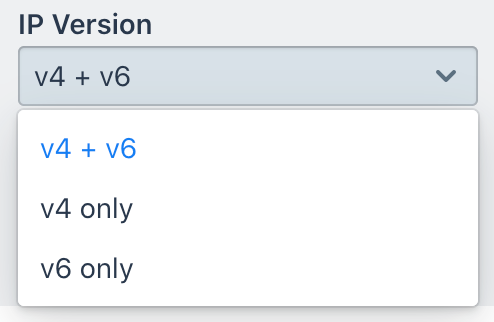 Users now have the option of controlling whether a test will target both IPv4 and IPv6 addresses.

Choosing TCP (as an alternative to ICMP) at test creation time and specifying a destination port to test towards will result in a test that will send a certain number of TCP SYN probes and either expect a SYN-ACK or RST in response. This is currently only applicable to ping tests (not trace) and requires ksynth (agent) 0.0.6 or newer. 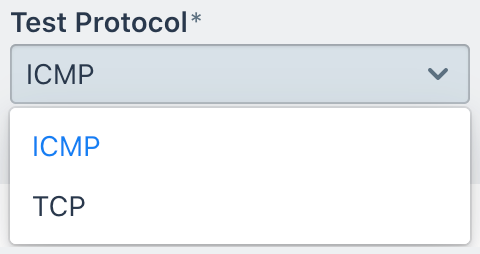 Users can choose TCP as an alternative to ICMP at test creation time.

Hovering over a subtest in a site-mesh test will now show path metrics in both directions and highlight both tests. 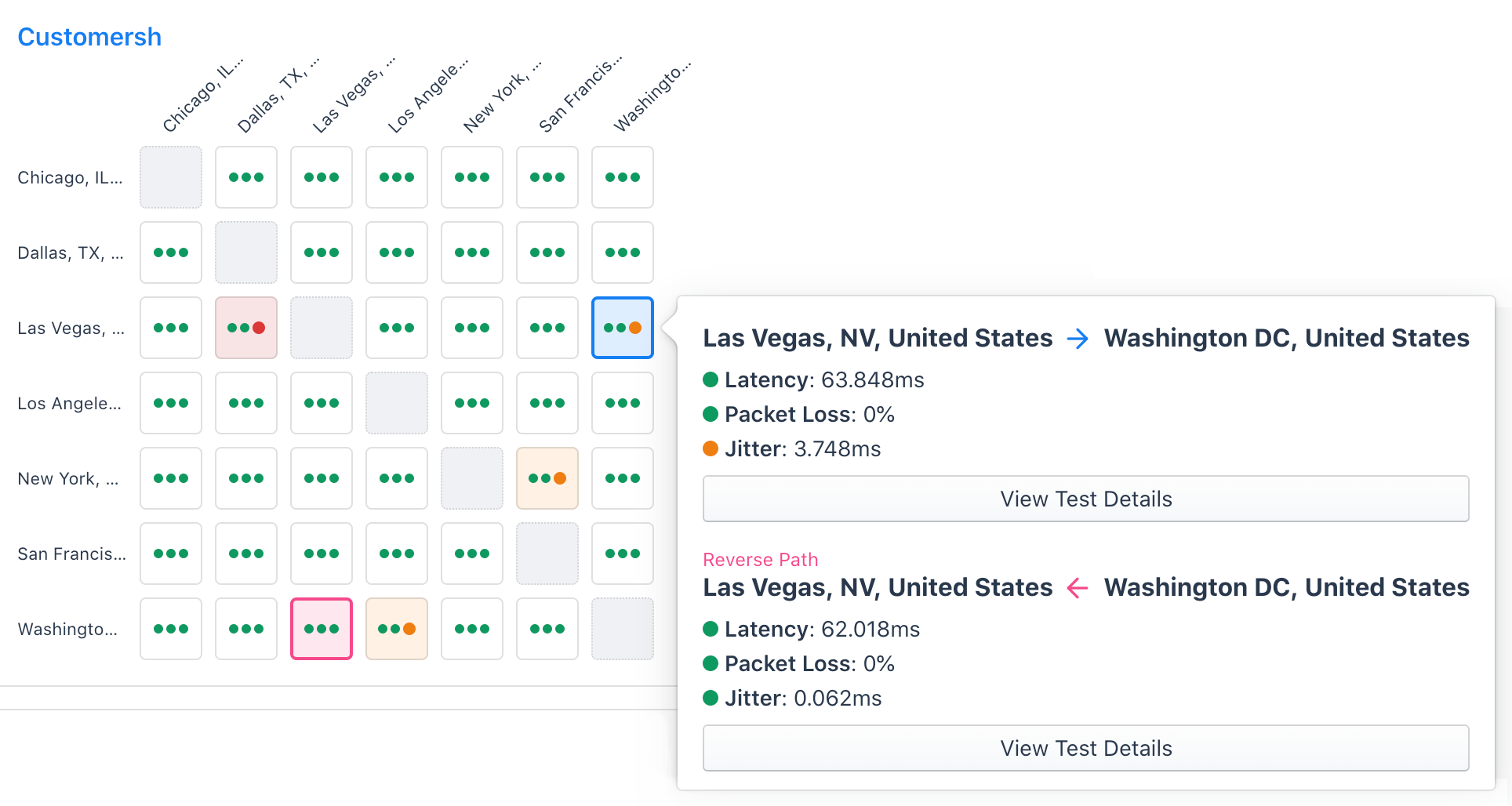 Hovering over a subtest in a site-mesh test shows path metrics in both directions and highlights both tests.

We have identified a way for customers who run the sFlow protocol to achieve the benefits and visibility offered by Hybrid Maps and other portions of the product. sFlow sends Kentik per-flow byte counts attributed to physical interfaces, while most network operators configure IP addressing logical sub-interfaces. This leads to a disjointed experience in Kentik as our mapping services draw connections between devices based on the interface ID, where we find IP addresses configured. The queries needed to understand the data flowing between the devices rely upon a completely different interface ID.

To support this situation, users must supply a manual mapping of interface IDs to VLAN interface IDs. We have developed example code on how this can be automated using Juniper devices interface and VLAN names. Before running the code, the user will also need to configure the device using the new “Advanced sFlow” device type. Once the device has been modified, and a map supplied, the user can make use of three new dimensions: 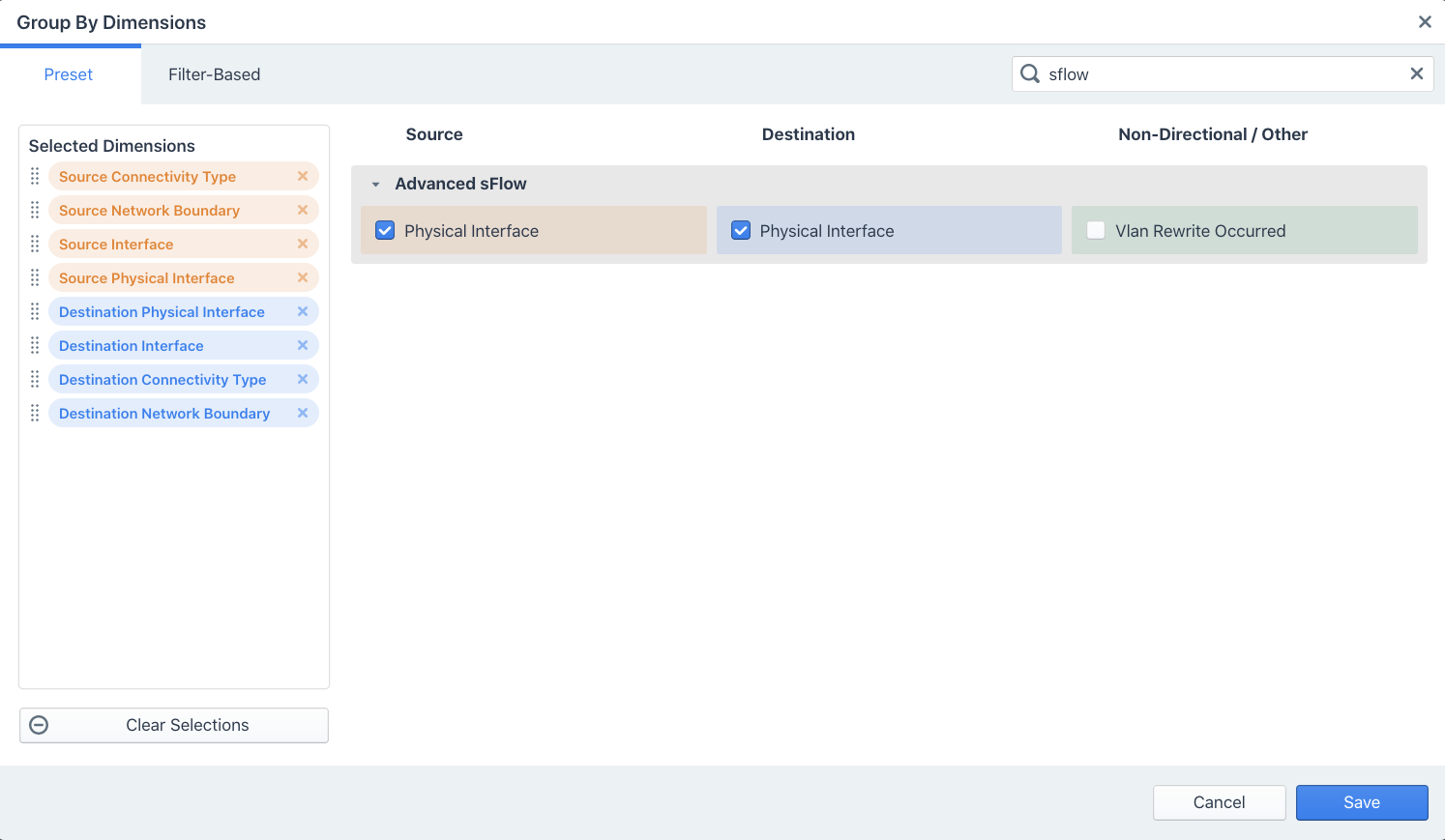 A new selector is available on the Hybrid Network Maps to select how Kentik draws connections between devices. Users can now choose to draw connections using layer 2, layer 3 or both.

Layer 2 connectivity requires that users run the LLDP protocol and allow Kentik to poll this data over SNMP. We will then find matches that only exist at layer 2. 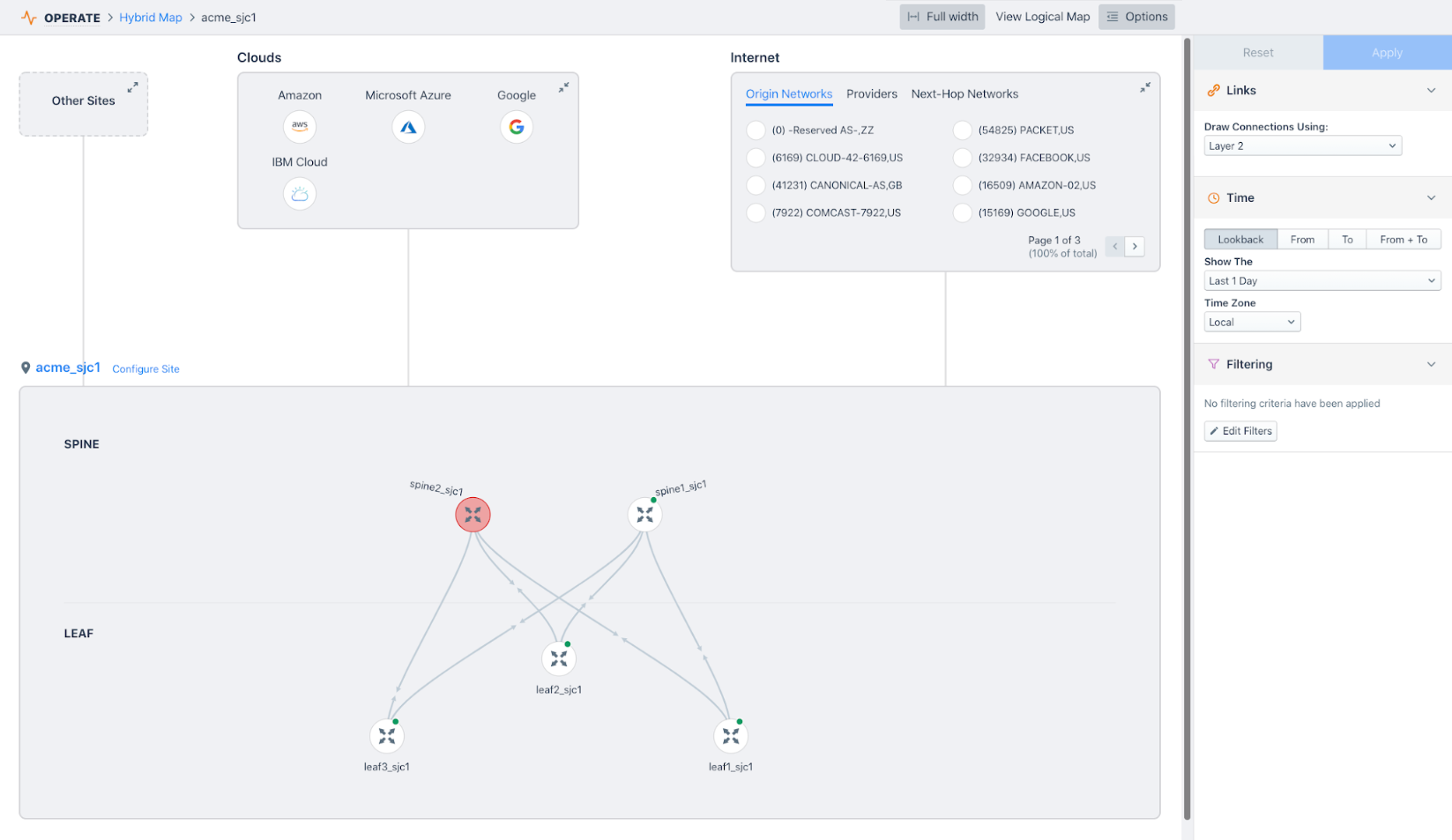 An example of the Kentik demo system infrastructure when only displaying layer 2 connections. 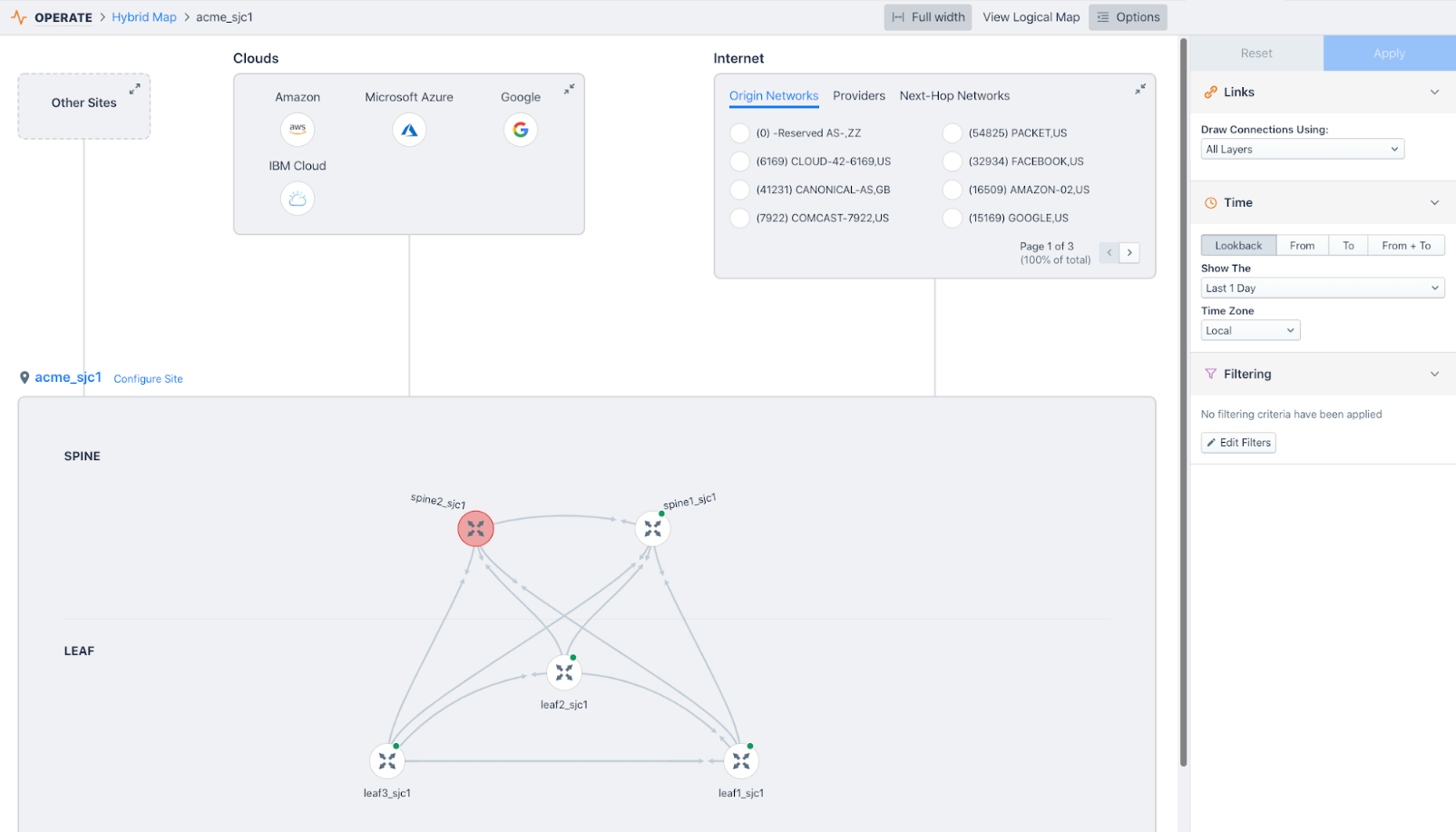 An example of the Kentik demo system infrastructure when only displaying both layer 2 and layer 3 connections.

This metadata is also visible on the interface admin page:

The metadata used to support layer 2 and layer 3 for Hybrid Maps can be displayed on the interface admin page.

We are continuing to improve onboarding options to give customers and prospects more flexibility in learning about and evaluating Kentik. We now have separate paths for customers interested in flow, synthetics or a guided demo mode. The options will appear clearly on the revised onboarding page.

We have started to add guided, in-product demos of real-world use cases. We are starting with two different situation demos: 1. Troubleshoot VPN Issues or 2: Manage Network Costs. We expect to add an expanding list of use case situations over time. 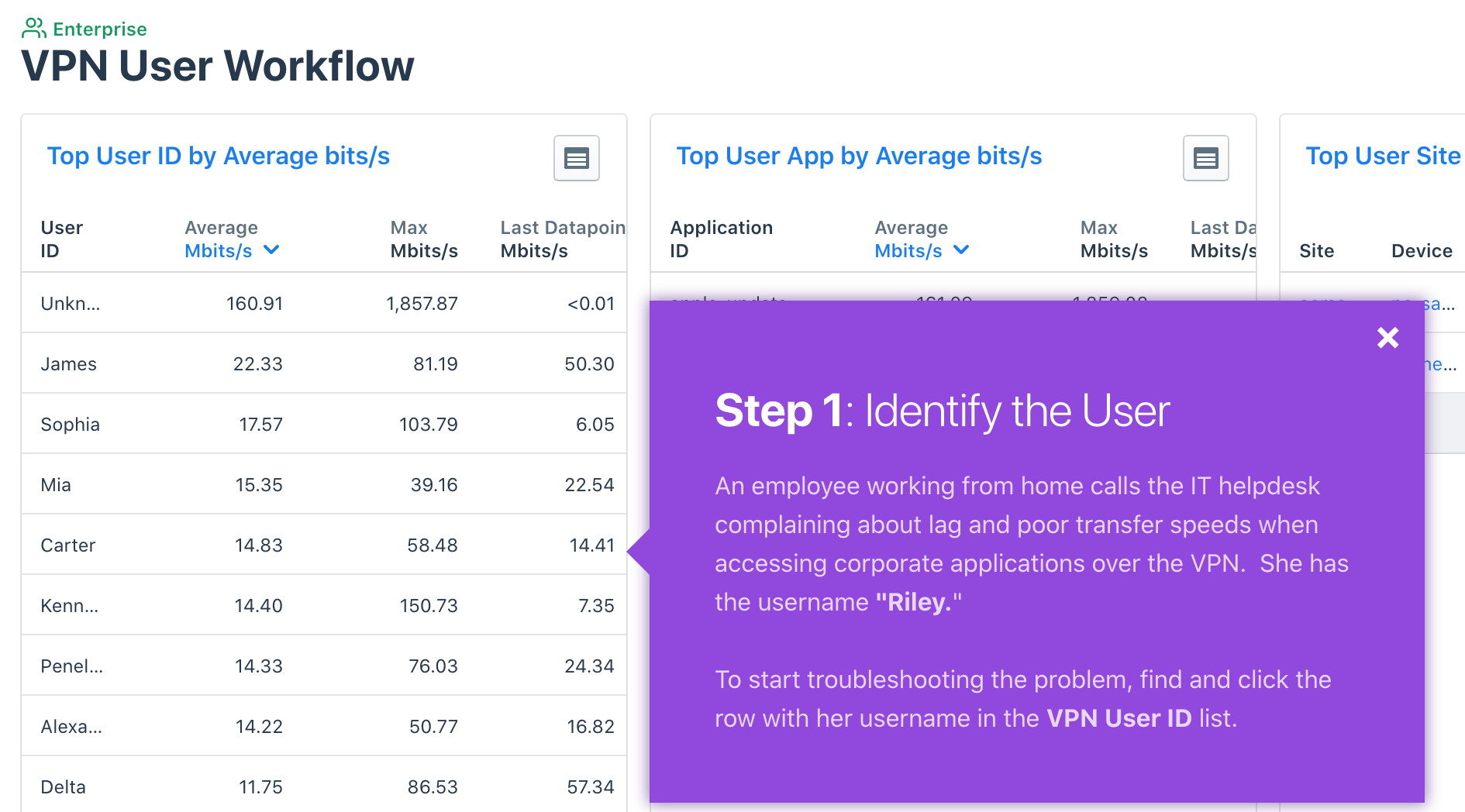 For Kentik users onboarding, we have introduced a new guided demo mode for specific use cases — troubleshooting VPN issues, in this case.